Success in root canal treatment is achieved after thorough cleaning, shaping, and obturation of the root canal system. The main reason for the unsuccessful root canal treatment is the lack of knowledge of anatomic variations and the characteristics of the different teeth. A mandibular first molar with the third distal canal is very rare, and its occurrence has been reported to be around 0.6%. This article presents the endodontic management of the first mandibular molar with mid-distal canal, which is not quite common.

Successful treatment in various fields of dentistry requires accurate knowledge of the morphology of human teeth with the objective of improving oral health and restoring stomatognathic functions. All teeth may have anatomically complex and highly variable canal configuration.1 Thus, preoperative awareness of, and the ability to identify, the landmarks of usual morphology as well as any unusual anatomy of the root canal system is the fundamental prerequisite for a successful endodontic treatment.2 Incomplete debridement of the root canal system is a major cause of endodontic failure. Due to the inability to locate canals, the remnants of pulp tissue are left behind, which can affect and compromise the treatment outcome. This could be one of the most common reasons for the failure of endodontic treatment. Thus, a better understanding of tooth morphology and anatomy is necessary for successful endodontic treatment. The mandibular first molar usually has two roots with two canals in the mesial root and one (65%) or two (30%) canals in the distal root.3 Because of the higher incidence of endodontic treatment of this tooth, the clinician may encounter a greater variation in its root: single root, four roots, taurodontism, radix entomolaris, radix paramolaris, and variable internal anatomy (middle mesial, middle distal, and C-shape).4 This case report presents a successful nonsurgical management of the mandibular first molar with uncommon anatomical variation of an extra mid-distal canal.

A 16-year-old male patient reported to the Department of Conservative Dentistry and Endodontics, complaining of pain in the lower left back region of jaw for 1 month. Patient gave a history of pain, which was spontaneous and continuous in nature. Intensity of pain increased at night. There were no aggravating and relieving factors. There was history of sensitivity to hot and cold food. His medical history was noncontributory. On clinical examination, the mandibular left permanent first molar was carious with tenderness on percussion. Vitality testing revealed delayed response to cold test as well as electric pulp test.

Preoperative radiograph showed deep caries in #36 involving the pulp and widening of periodontal ligament (PDL) space. The cumulative assessment following clinical, radiographic, and vitality tests led to a final diagnosis of chronic irreversible pulpitis with acute apical periodontitis of the suspected tooth requiring endodontic treatment or extraction. After the pros and cons were explained to the patient for both the procedures, patient decided to go for root canal therapy. No anatomical abnormality was observed on the preoperative radiograph.

The tooth was anesthetized using local anesthesia (2% lignocaine with 1:100,000 adrenaline) and isolation achieved under rubber dam. Caries were completely removed, and endodontic access cavity was established. An endodontic explorer was used for initial examination, and four orifices were found in the pulp chamber, two mesial and two distal (MB, ML, DB, and DL) (Fig. 1). Thorough inspection, after exploring and cleaning the grooves, showed that there was an extra distal canal between the previously identified distal root canals. The canals were negotiated using a #10 K-file (Dentsply-Maillefer). Working length of each canal was determined using apex locater and confirmed radiographically (Fig. 2). The radiograph revealed three distal canals merging into one canal at the apex. The root canals were prepared in a crown-down method using NeoEndo rotary instrumentation (25/6%). Cleaning was performed in between each instrument by irrigation using saline, 2.5% sodium hypochlorite solution (NaOCl), and 17% EDTA. 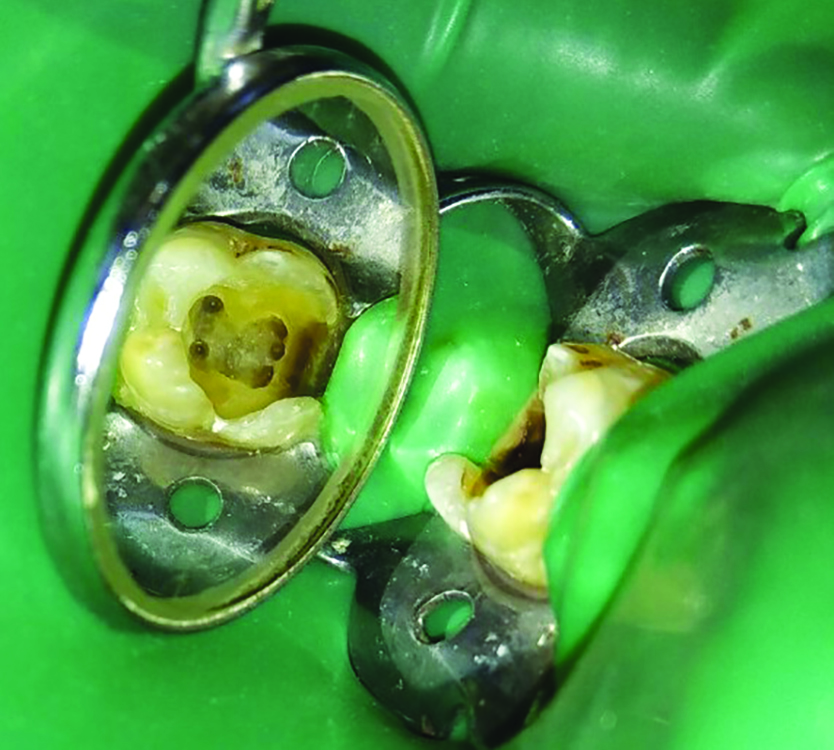 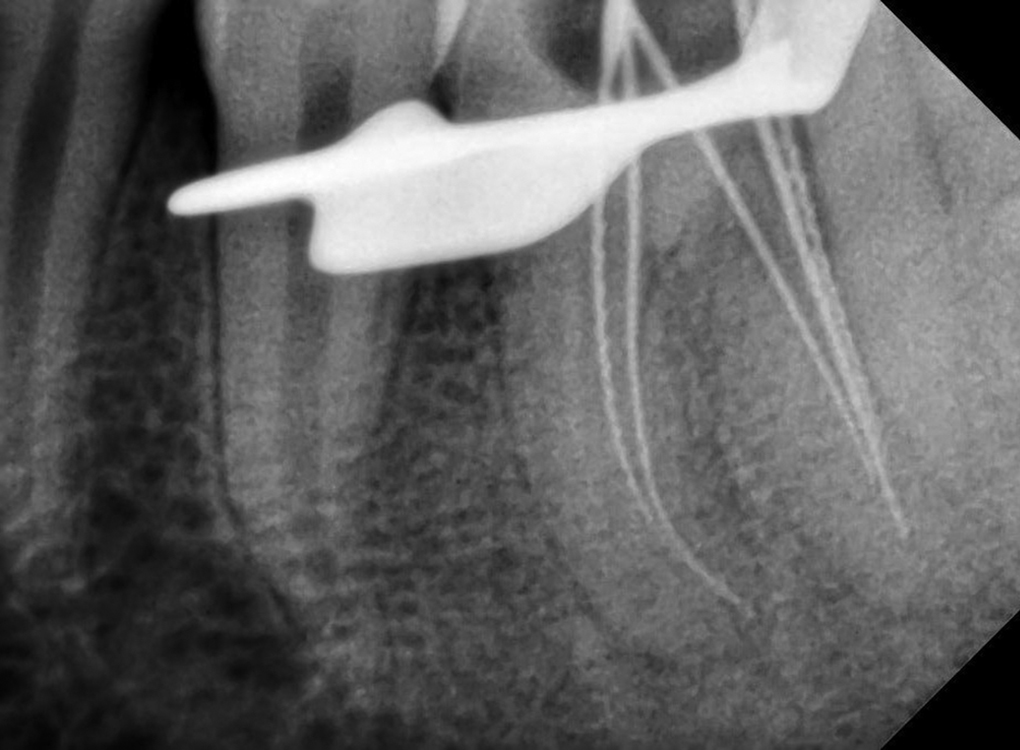 Cone-beam computed tomography (CBCT) images were taken with the informed consent of the patient to confirm the presence of the third distal canal. Axial CBCT images taken after biomechanical preparation of the canals revealed the presence of three independent root canals in coronal third part and middle part of the distal root with only one canal in the apical axial image (Fig. 3). 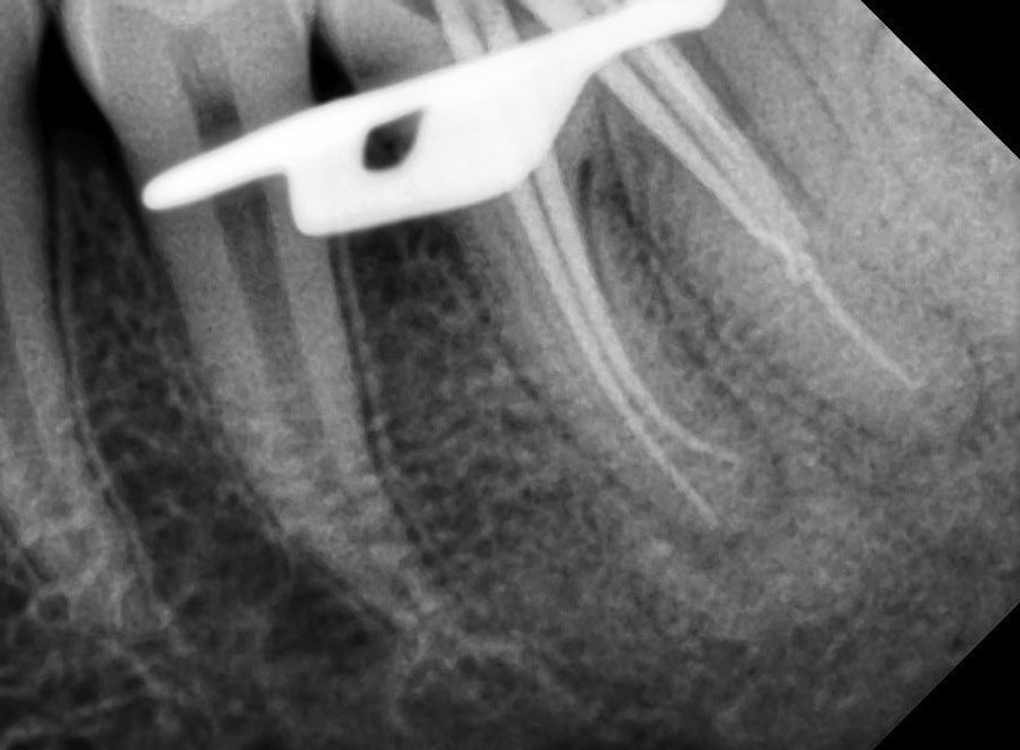 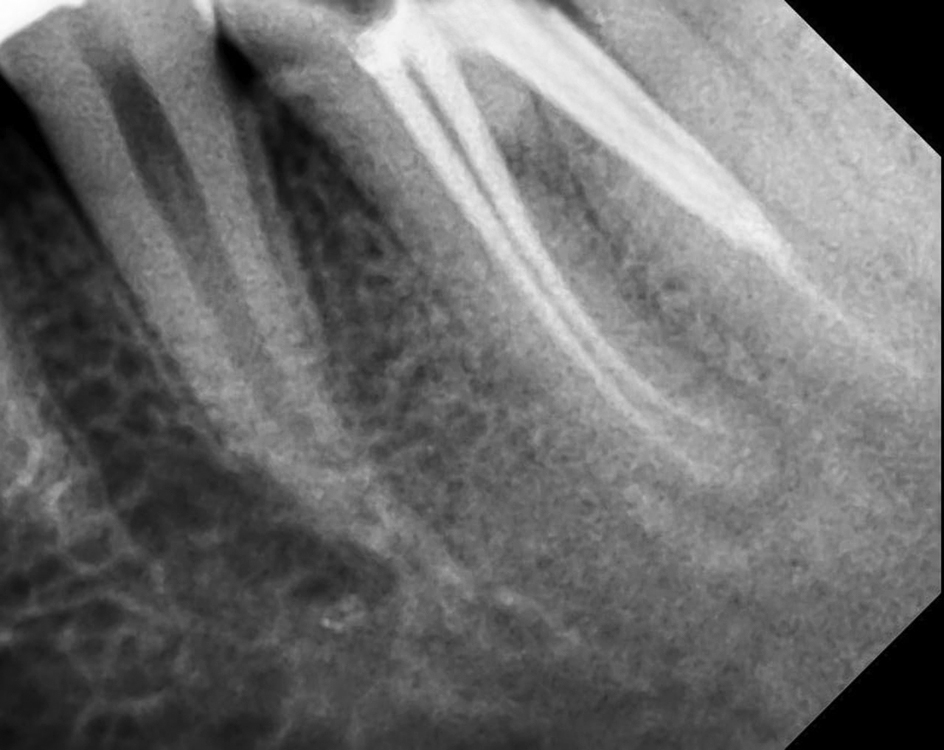 The goal of endodontics is to restore the function and esthetics of the involved tooth. This includes cleaning, shaping, and disinfection that would permit for three-dimensional obturation of the complete root canal.5 Complete knowledge of not only the usual anatomy of the root canal system but also possible root canal variations is imperative for the success of endodontic treatment.6 Vertucci reported that significant number of failed root canal cases could be because of variations in the apical anatomy, such as the presence of fins, apical deltas, isthmuses, and extra canals. Therefore, the importance of identification of all the canals followed by their complete debridement and obturation cannot be overemphasized.7

The first permanent tooth to develop is the mandibular first molar at the age of 6 years. In the adult dentition, it is the most heavily restored tooth and most common tooth to undergo endodontic treatment.4 Normally, the first mandibular molar has two separate roots—mesial root and distal root. The distal root has a round, or more frequently elliptical canal and two canals in the mesial root.8 The distal canal (s) is usually straight all the way to the apex, oval, or flattened in cross section. It usually has (i) a mesial root with two canals (94.4%); (ii) a third canal (middle mesial), at an incidence of 2.3%; and (iii) a distal root with one (62.7%) or two (37.3%) canals.9 The occurrence of the third canal in the distal root of the mandibular molars is about 0.6%, which was much lower than in the mesial root.7

It has been hypothesized that during tooth maturation, the secondary dentin apposition would form dentinal vertical partitions inside the root canal cavity, resulting in multiple canals. By this process, an additional canal may get formed in the root canal cavity of the mandibular molars. This extra canal is centrally situated between the two main buccal and lingual root canals. The diameter of the third canal is generally smaller than that of the other two canals. The larger mesiodistal dimension of the distal root, compared to that of the mesial root, may account for the rare occurrence of the third canal created by apposition of dentin in the distal roots.7

Anatomical variations of the root canal system in the mandibular first molars can be identified by taking radiographs in different directions. Two-dimensional methods for the morphological study of pulp space are being replaced by three-dimensional models like CBCT, which can help in better detection of such variations.10 The introduction of apex locators, nickel-titanium (NiTi) instruments, operating microscopes, digital radiography, and cone-beam computed tomography has significantly enhanced the ability to detect, clean, and shape root canals.9 Despite the disadvantage of not using operating microscope in this clinical case, the middle distal canal was found during thorough inspection of grooves and isthmus between the root canals with the help of surgical loupes (magnification 2.5×).

Fabra-Campos evaluated 145 mandibular first molars and reported that 2.75% of the teeth had five canals.11 A clinical investigation was conducted by Martinez-Berna and Badanelli and found that out of 2362 mandibular permanent molars, 29 teeth had five root canals.12 A comprehensive survey of the endodontic literature reveals that the first mandibular molar with three canals in the distal root is a rare occurrence.13 Berthiaume in 1983 first reported three distal canals in the first mandibular molar; however, the three distal canals ended in two apical foramina.14 Reuben et al. examined 125 mandibular first molars using SCT and found no teeth with three distal canals.15 Quackenbush reported the presence of three separate distal canals in two extracted mandibular first molars.16 In the present case, five separate orifices were identified in the floor of the pulp chamber—two were in the mesial root and three were in the distal root—and all three canals had a common apical opening, which was confirmed by CBCT, and the case was successfully managed.

This clinical case report describes the endodontic treatment of a first mandibular molar with five root canals. Mandibular first molars with five root canals are rare, but each case should be carefully investigated clinically and radiographically for any anatomic anomalies. Knowledge of both normal and abnormal anatomy influences the parameters of endodontic therapy and can directly affect the probability of success.