Case description: This case repot discusses about a maxillary first molar with three roots and six root canals. Root canal configuration was diagnosed with the aid of a dental operating microscope and confirmed with CBCT. The CBCT axial images showed the Vertucci type II canal pattern in all the three roots. The pulp chamber was modified from conventional triangular access to rhomboidal shape to explore additional canals and root canal preparation was done.

Conclusion: The maxillary first molar is a tooth with wide variations in root canal morphology. Use of a dental operating microscope is of great help in such cases and use of CBCT images helps to understand the rare root canal configuration.

Clinical significance: A wide range of root canal variations are reported with the first maxillary molar. The use of a dental operating microscope and CBCT helps in better understanding of such variations in root canal configuration. Root canal treatment done with these tools can provide better treatment outcome.

A 36-year-old male came to the department with a complaints of pain in relation to upper posterior tooth for past 1 month. Pain was mild and continuous, which got aggravated during night time. No relevant medical history. On examination, there was a deep dentinal caries in relation to 16 with tenderness on percussion. The radiograph showed evidence of proximal (mesio-occlusal) caries extending to the pulp chamber with widening of periodontal ligament space (Fig. 1). Diagnosed as acute irreversible pulpitis with apical periodontitis and the treatment plan was to go for root canal treatment in relation to 16. Root canal treatment was initiated after giving local anesthesia. The tooth was isolated with rubber dam and the coronal access was prepared. Complete deroofing and exploration of the pulpal floor under a dental operating microscope revealed six root canal orifices, i.e., two mesiobuccal canals (MB-1, MB-2), two distobuccal canals (DB-1, DB-2), and two palatal canals (P-1, P-2). The root canal orifice of P-2 was seen distal to the main palatal canal orifice (P-1). The root canal orifice of MB-2 was seen in the middle of the imaginary line connecting MB-1 and P-1 canal orifices. The DB-2 was seen adjacent to the DB-1 canal orifice in the direction of imaginary line connecting DB-1 and P-2 canals (Fig. 2). The CBCT axial view showed two mesiobuccal and two palatal canals, which joined and form a single mesiobuccal canal and a single palatal canal at the junction of middle and apical third of the root (Vertucci type II-1 configuration). The distobuccal root showed two canals (DB-1 and DB-2) at the orifice level, which joined at the coronal third itself and exit as one canal (Vertucci type II-1 configuration) (Fig. 3). Cleaning and shaping done using the Dentsply protaper gold rotary instrument up to F2 in MB-1, MB-2, DB-1, DB-2, and F3 in P-1, P-2 canals. The two canals in distobuccal root become one as the thin layer of dentin between distobuccal canal got removed following cleaning and shaping (Fig. 4). After thorough cleaning and shaping, the root canals were obturated with Dentsply protaper gutta-percha point F2 in MB-1, MB-2, DB-1, DB-2, and F3 in P-1 and P-2 canals using the single-cone obturation technique (Fig. 5). Final restoration was done with composite, followed by metal ceramic crown placement (Fig. 4). The tooth was asymptomatic on 6 months’ postoperative evaluation (Fig. 6). 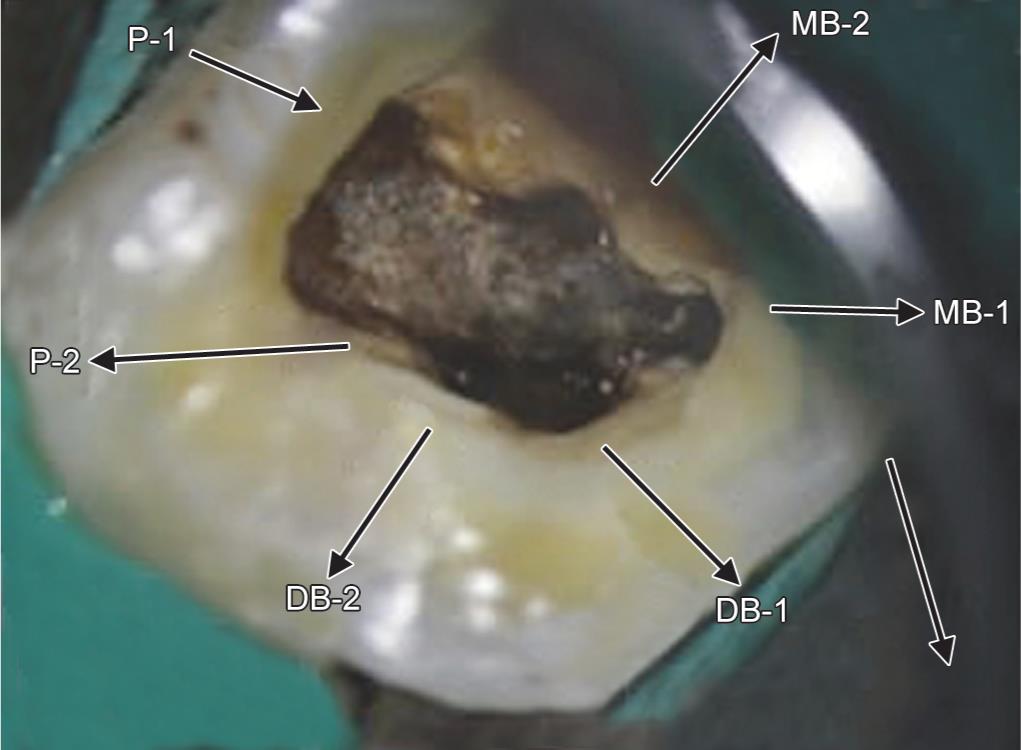 Figs 3A and B: Cone-beam computed tomography axial view at different depth

Figs 4A and B: Mastercone and obturation 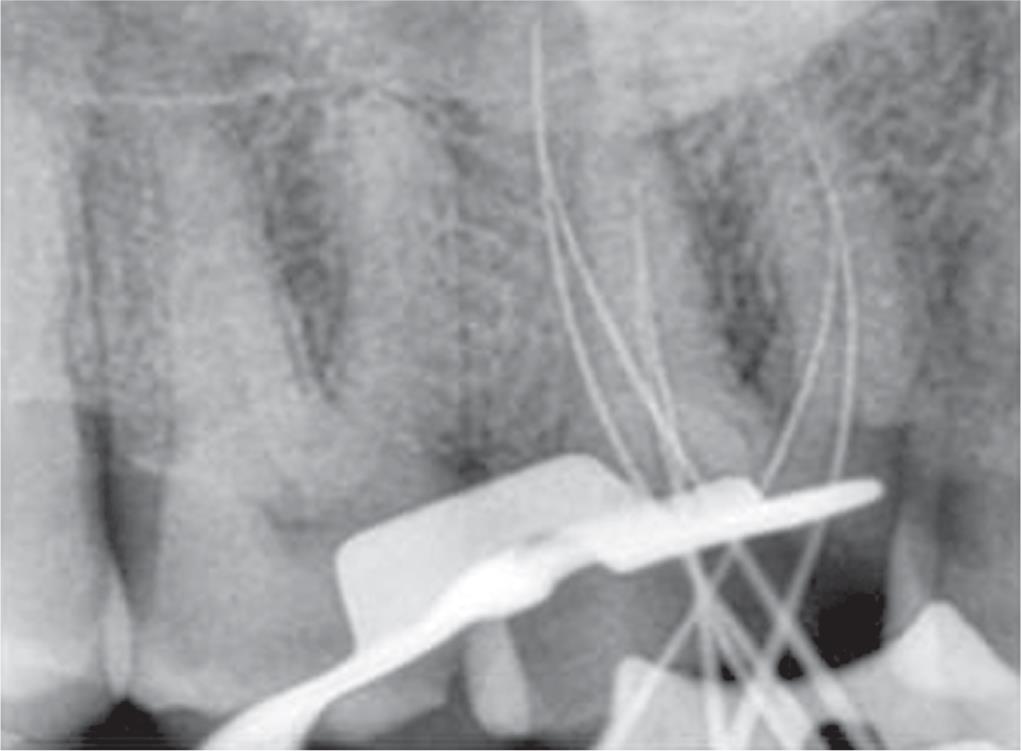 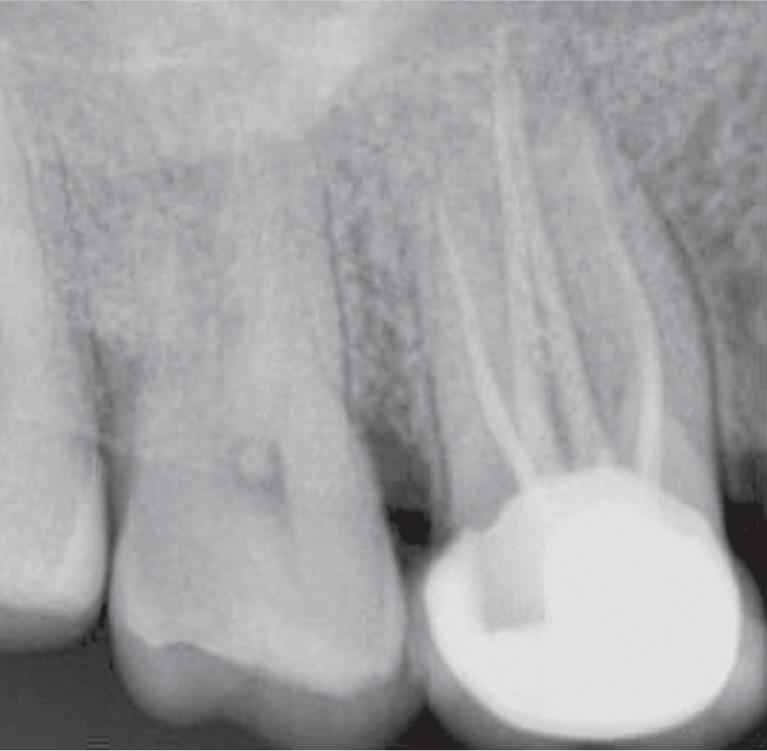 Root canal configuration of the maxillary first molar presents anatomical variations ranging from one to seven.7 Incidence of more than four canals has been reported in some studies. Holderrieh et al. have reported five canal configurations;8 Maggiore et al. and Adanir et al. reported six root canal configuration.9,10 In a case report, Jojokottooret et al. presented seven root canals in a maxillary molar.11 Studies on the mesiobuccal canal configuration of maxillary molar showed 48.5% with single canal, 37.5% with two canals merged into one, and 29% with two canals with two separate apical foramina.12 In this case, the upper first molar had six root canal orifices, i.e., MB-1, MB-2, DB-1, DB-2, P-1, and P-2. The CBCT revealed Vertucci type II configuration (2-1) of root canals in each root. The suggested reason for additional root canals is the variation occurring during the development of root. The shape of the Hertwig’s root sheath determines the number of roots in a tooth. If the diaphragm remains in the shape of a collar, a single-rooted tooth forms and if two or three tongues of the epithelium grow toward each other from this collar to bridge the gap and fuse, two or three diaphragms evolving independently from each other will form. They will either remain fused, forming fused roots, or single roots with multiple canals, or separated forming distinct roots in multirooted teeth.13

There are several methods for detection of additional canals like champagne bubble test, methylene blue, fiber optic light, magnifying loupes, and dental operating microscope. A dental operating microscope has definite advantage over other methods. It was demonstrated that a dental operating microscope helps in the detection of second mesiobuccal canals in 82% of cases than with the naked eye.14 In another study, it showed that 41.3% of MB-2 canals were identified with magnifying loupes and 93.7 with a dental operating microscope.15 Conventional intraoral periapical radiographs that are routinely used to assess the root canal anatomy give only two-dimensional representation of a three-dimensional object. Therefore, other diagnostic methods like CBCT are useful in determining the root canal morphology.16,17 The key advantages of using CBCT is that it permits 3-D reconstruction of the root canals. Its axial view also provides a cross-sectional image of tooth at different levels from coronal portion to radicular portion. Compared to CT, there is reduction in radiation exposure dose.18 The pulp chamber was modified from conventional triangular access to a rhomboidal shape to explore the additional root canals.

A wide range of root canal variations are reported with the first maxillary molar. The use of a dental operating microscope and CBCT helps in better understanding of such variations in root canal configuration. Root canal treatment done with these equipment can provide better treatment outcome.